When the children of Jacob grew up, they began to herd the cattle. Joseph was Jacob’s favorite son. Therefore, the brothers treated him unfriendly.

This hostility turned into hatred after two dreams that Joseph had. In the first dream, he saw the brothers knitting sheaves. The sheaf of Joseph stood straight.

The sheaves of the brothers stood in a circle and bowed to the sheaf of Joseph. The brothers said: Are you going to reign over us? will you own us? (Genesis 37:8).

In the second dream, Joseph saw the sun, the moon, and eleven stars bow down to him. The father asked: Can it be that I and your mother and your brothers will come to bow to you to the ground? (Genesis 37:10).

The brothers soon had an opportunity to show their hatred for Joseph. They herded cattle. The father sent Joseph to them. When they saw their brother, they planned to kill him.

But Reuben showed compassion and said, Don’t shed blood; Throw him into the ditch in the wilderness, and lay no hands on him (Genesis 37:22).

Then they took off his clothes and, throwing him into the ditch, sat down to eat bread. Seeing a caravan of Ishmaelites passing by, heading with goods to Egypt, the brothers sold it to merchants for twenty pieces of silver.

Having smeared his clothes with the blood of a goat, they showed him to his father and said that his son had been torn to pieces by a predatory beast. Jacob tore his clothes, dressed in sackcloth (sackcloth) and mourned for his son for many days (see: Gen. 37, 34).

In Egypt, the merchants resold Joseph to the pharaoh’s courtier and Potiphar, the head of the bodyguards. At first, Joseph’s life in a foreign land turned out well.

The Lord was with Joseph. Everything he did was a success. Potiphar, seeing this, set it over his house. The Lord blessed the house of the Egyptian for the sake of Joseph.

But soon Joseph was tested. He was handsome. Potiphar’s wife, unsuccessfully pursuing a sinful relationship, slandered the chaste young man.

He was imprisoned. But even there the Lord helped him. Joseph won favor in the eyes of the head of the prison.

Some time later, two courtiers (the chief butler and the chief baker) were thrown into the dungeon. One day they had a dream. Joseph interpreted them.

The prediction came true: the butler was pardoned, and the baker was hanged. Two years later, the pharaoh had a mysterious dream. He stood by the river.

Pharaoh woke up and fell asleep again. Sees another dream. On one stalk rose seven ears of fat and good. After them, seven ears of corn sprang up, skinny and withered by the east wind.

The seven skinny ears devoured the seven fat ears. Pharaoh was confused by dreams. He called on all his magi and sages, but no one could interpret the dreams.

Then the butler remembered Joseph. He told the pharaoh about him, he ordered to bring the prisoner and asked him to interpret the dreams. Having received admonition from God, Joseph interpreted them. Seven fat cows and seven full ears are seven years of abundant harvest.

The dreams that the pharaoh saw have a purely Egyptian specificity.

In Egypt, the cow was considered a symbol of soil fertility, as well as the personification of Egypt itself. The river from which the cows came out is most likely the Nile. 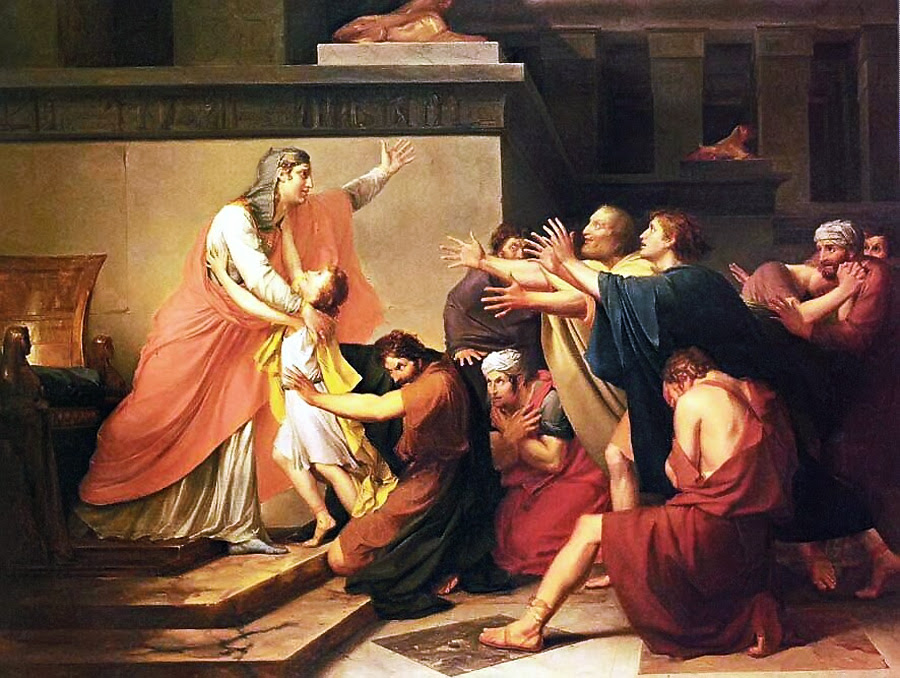 Due to its periodic floods, it was the main source of the country’s fertility. Joseph gave advice to appoint overseers and during the seven plentiful years to collect a fifth of the harvest in the granaries.

Pharaoh placed Joseph over all the land of Egypt. As a sign of the authority entrusted to him, he removed the ring from his hand and put it on Joseph’s hand.

Pharaoh gave Joseph a new name – Tzafnaf-paneah, which in Egyptian means: “God says: He lives.” Pharaoh gave him Aseneth, the daughter of Potifer, the priest of Iliopol, to wife.

Joseph was thirty years old. Even before the onset of the famine years, his wife Aseneth bore him two sons: Manasseh and Ephraim.

The meanings of these Jewish names corresponded to the circumstances of Joseph’s life and the feelings he experienced: Manasseh – giving (the opportunity) to forget, Ephraim – fertile.

Patriarch Jacob adopted them before his death (see Gen 48:5). Therefore, the tribes of Israel became thirteen instead of twelve. However, during the division of the land of Canaan, only twelve participated in the lot, since the tribe of Levi, intended for priestly service, did not receive an inheritance.

With faith and hope in God, Joseph did the work that the Lord had put him on. Soon the seven-year abundance began. During these years, Joseph was able to accumulate huge supplies of food in the granaries. When the seven years of hunger came, Joseph sold bread to the Egyptians.

The famine continued to intensify in the land of Egypt. The calamity befell other countries, including the land of Canaan. Jacob learned that there was bread in Egypt and sent his sons to buy it. Only the beloved and young Benjamin was left at home by the patriarch, fearing for him.

The dream of Joseph, told by him to his brothers, began to come true. The sheaf of Joseph symbolized the grain reserves that he created in Egypt, and the worship of the sheaves of the brothers meant their request to Joseph to sell them bread so as not to die of hunger.

The brothers who came to Egypt did not recognize Joseph. They could not recognize in such a high ruler as he became, their brother. But Joseph recognized them. He sold the bread and let them go, demanding that they bring his beloved brother Benjamin. In order for the brothers to fulfill this requirement, he kept Simeon with him.